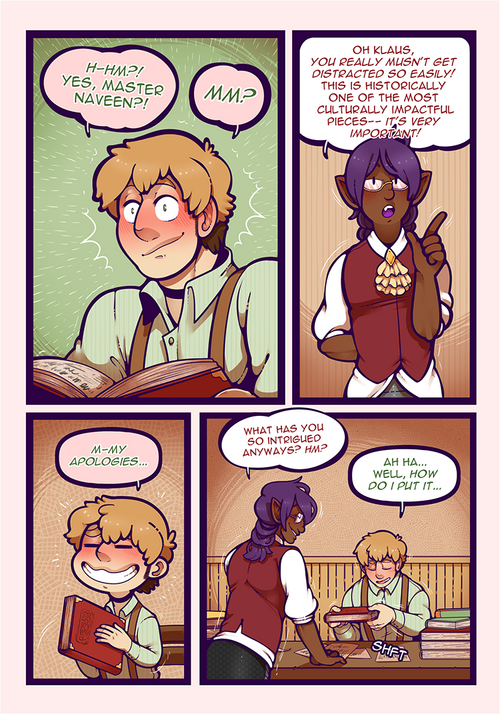 Uploaded complete version + extras of Ch.3 of MMiaN and prettied up the Itchio page a little. Check it out!

Get My Master is a Naga - Complete Collection

My Master is a Naga - Complete Collection

I know it was submitted a long time ago, but I've just discovered your comics while waiting for Tomai's full release (I've commented on that recently too). I've read the three chapters and anthology right now, and it was the cutest thing ever oh dear I don't even... fff so sweet!

I really love the characters here - they sort of strike a sensible chord in my - I'm a sucker for that kind of stories with some sort of ex-slave or whatever and his or her savior AND for master and servant things too, so it's a two in one. And well, they're simply lovely anyway, all backstories aside!

And well, as always I'm amazed by your artstyle too. I can't even get over the fact I like it so much since it SHOULDN'T be my style, actually. I usually like the very slender, delicate, maybe even angular and effeminate style, so the polar opposite of yours, basically haha - but I dunno, something in it is so so pleasing and harmonious and soft and hnn! I'm grateful to no end to AWOO, since I've discovered you thanks to that game! (which I am still awaiting excitedly too, of course!)

Are you planning to do more chapters for MMiaN? In any case, I'll be reading Space School next, I think!

And sorry for not being able to donate anything at the moment! As said in my comment on Tomai, I'm so utterly broke I can't really afford purchasing anything righ now. But when I manage to get out of that situation, I'll be sure to donate something, because your work is really worth it!

Aw gosh, well thank you AGAIN for this lovely comment as well! I'm glad to hear you like MMiaN, it somehow tends to be my favorite work with people-- though honestly I've all but run out of ideas for it! ;o;

As of right now, I don't have many solid plans for anything future MMiaN. I recently finished a 5-page exclusive comic I'll be releasing here eventually (for $5, sorry!) since it was a Patron-exclusive thing originally-- but other than that, my focus has really been on Solanaceae-- which has it's main comic and then VN's! (The VN doesn't require any knowledge of the comic to check out, by the by!)

Sorry if it's disappointing that I don't have anymore plans for MMiaN-- but I hope you'll find something you like in my other works like Solanaceae, Space School, etc etc~ I've also got a ton of stories I'll be working on in the future as well-- so I hope you'll look forward to it! <3

Thanks again for your comment and I hope you have a lovely day!

No worries about MMiaN - I love it, but it isn't the kind of story that I imagine going forever. I was mostly curious if you were planning more or not!

Weeell... about what you said... you know, about hoping I'd find something I'd like in your other works... I've read all of the chapters of Space School that are on itch.io (didn't start chapter 8 on the website yet) in one sitting right after commenting here.... I did it twice....... And I must say it's the first time I've cried (and half forgotten to breathe haha) while reading a comic since... uh... forever? I didn't know it would be the case, but I like it even more than MMiaN. And more than most of non visual novel things I've read these past years, to be honest. So... I'm even more amazed by your work now haha. I think I'll have to do some fanart when I'll have the time!

I won't be able to tell everything I love about this story and the characters because it was a lot of chapters and I must admit the feels are still too fresh and I'm way too excited about it as of now. Honestly, your comics really made my day! But with Space School it was even more "special" - it's that kind of feeling when you read/watch/play something, and after that, you sit back and think it changed something in you. Sooo... I guess I have to thank you for that haha!

;O; Oh my gosh, thank you so so much! This comment has totally made my day// I'm so honored and so glad to hear this!!!

To hear it made you cry, or even just that you read it twice is so wonderful to hear and has really helped brighten up an otherwise tough week I just had...thank you so much! Your comments have been so long and thoughtful and I love reading them and I just hope that you can continue to keep up with Space School and enjoy it?!

And I hope my other comics will be fun too if you decide to check them out! Chapter 8 of Space School is going to be another REALLY important one so I hope you're looking forward to it!!!! <33333

I'll need some time  to digest the feels of Space School before reading a new comic haha! But I'll get to it for sure!

For now, I'm hesitating if I should read Space School chapter 8 right of the bat or not. Part of me wants to dive into it, but part of me doesn't want to wait for the updates once I catch up to the last page, so it may be better to wait for the chapter to be done... Well, who am I kidding... of course I won't be able  to wait so long haha! I'll probably catch up in the next days or so, so I may start commenting on the website instead, we'll see.

Though I must say, now that I've calmed down a bit, that the character developement is amazing in Space School. They all acted in a quite immature way for a while - all of them in a different way, but it's nice to see them evolving slowly. Even if they made me cry, I loved the chapters 5 to 7 with all the relationships crumbling down and then rising up again. Even though I obviously don't know everything about the characters yet, I could painfully see the point of each side of the conflict. When no one is right but no one is wrong either, it's when the issue is the most painful. And well, the boys are still so young too - it's hard dealing with that kind of stuff even as an adult so at their age... ugh!

An interesting side note is that I'm asexual myself, and oh dear how did I agree with Joe about Zeggy making people unconfortable with his behavior - he was making ME unconfortable, and I understand why Joe ended up kinda exploding on him. It's even worse because Joe seems to have a LOT of empathy - he would have given up on hanging out around Zeggy otherwise I believe. That caring grumpy birb!  But at the same time, even though Zeggy actually made me unconfortable more than once, I still think he's actually my favorite character. His internal struggles struck my heart so hard! And besides, his fragility is so painfully obvious that you can't stay mad at him. Despite all of his social awkwardness and inappropriate behavior, he's sweet and it's hard not to want to protect him. I can also feel a lot of Alkaline's pain there - it's SO HARD to tell someone that you don't like something about them, especially if you care about and don't want to hurt them. He may not have been able to talk about it before the incident at the end of chapter 6, but I still think he was very brave to finally do so at the hospital later. He's such a cutie, seriously!

And well, not to mention I'm hyped about the whole plot. So yeah, overall it's really easy to get sucked into that comic haha!

And no need to thank me! Not only I'm being totally honest, but I guess we can call it even because I'm having a pretty bad time with a lot of things in my life right now, and your comic really helped me morale improve a lot haha!

Anyway, so yeah, I guess that's FINALLY all I had to say right now! I guess the next time I'll be commenting it'll be on the latest update of chapter 8 (or if I submit some fanart on DA)

Wah! I'm so glad to read this-- honestly so much of your comments were so spot on with so much of my intent-- it's just so!!! IT'S AWESOME, it motivates me so much!

If you did end up deciding to read Chapter 8 I'm excited to have you in the comment section, hehe! Especially because Chapter 8 will be so important for Alkaline specifically-- I won't go into details other than that~

What you said about Zeggy's fragility is so spot on, agh! That's a perfect way to describe it. The same goes for Alkaline and Joe, who struggle to want to help Zeggy but at the same time are annoyed.

I'm very pleased to hear you picked up on there being no wrong OR right side of what's going on in the comic-- as that's LARGELY the point and most of the time people either side with Joe, Zeggy, or Alkaline in the way they approach the situation, funny enough. People either think Joe is being too harsh, Zeggy did nothing wrong, or simply say nothing like Alkaline would. But in truth-- like you said, all of them are just kids trying to learn what the HECK is going on and how to treat each other better. (And then other more plot related stuff too, hehe!)

I'm excited to show all of these little parts and to introduce new elements to how it all works out! Your words thru all of these comments have meant so much to me as I often don't get such thoughtful and thought provoking comments. It really helps keep me grounded.