an acurate representation of me and my younger sister: 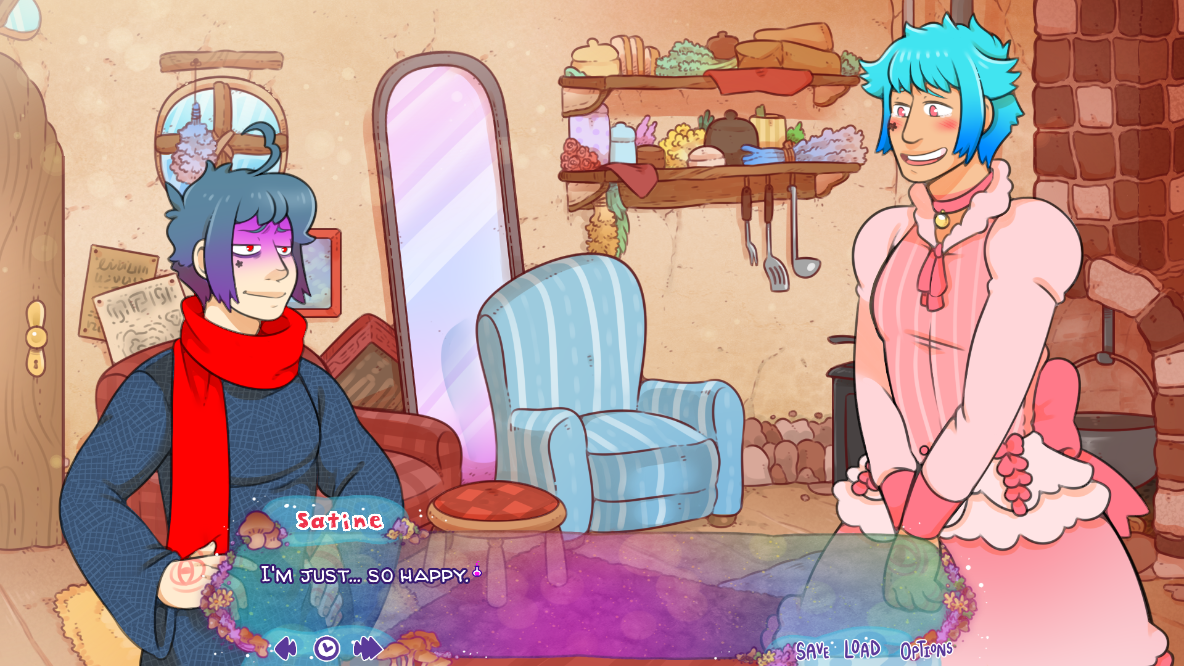 It took me a second to try to deduce  whether Battam was a girl or a boy, since there's no gender-specific pronouns that refer to him as either in the game's page, and I can't tell if I should be ashamed or not for doing that in the first place ^^;. The game looks fantastic, though, Sal looks hot AF xD

Thanks! There's already a ton of content to enjoy with these characters, so check those out while you wait for this first build to go public (or you can pledge to my Patreon and get all updates early):

Hey I am following your work closely on social media and I wonder that if the finished visual novel will be not only for patrons in the future or not. I am not trying to guilt trip. I'm Turkish and our money is kinda f*cked tight now(1 dollar equals about 5-6 Turkish lira). By the way keep up the good work I love your characters so much!

Not to worry-- the game will most definitely be out for free as more updates are made. (Er, until the very end, when it's all finished up it will be only available by being bought-- but that won't be for a WHILE, I promise) The way it works right now is that Patrons get updates EARLY. So basically; there's the free version of the game which will be hosted here and then the "Patreon version" which is just an update or two ahead of the public release.

Right now I'm busy working on the Tomai DLC, which is long overdue, and then I'll be working on releasing the 2nd update of this for Patrons, which will push the first update out here for everyone, for free! The second update already has a ton of the dialogue written so I can't imagine it'll take me too long once I'm working on it more full-time.

I do my best to make sure the majority of my work is available for everyone; but at the end of the day it is my job so there's just some stuff I have to do to get by. I appreciate you understanding and how kindly you brought up your question-- it's not something everyone does so I just really appreciate it!

So I will be able to play the finished result for free! I am more hyped now! Don't worry patience is fine, I am so happy to hear this that I can wait until I die.  I mean at first I saw your comics and was like: "They are free? Wow I never seen this before."

After that I downloaded "Another Time" for free and I was SO convinced that you liked your audience.

(My favorite is Sal by the way. He is such a cinnamon roll and reminds me of one of my characters as design.)

Yes, you'll be able to play the finished result for free! Patrons are just getting stuff early.

Aw! I'm glad to hear you found my comics and like 'em-- and that you downloaded Another Time! Always glad to see people enjoying that since it's slightly older now/// hehe

Sal seems to be a fan favorite and I can't blame anyone cuz he's super fun, imo! X) BTW, there's a Solanaceae Prologue comic running right now! It won't be up on Itchio until the first chapter finishes, but you can read it online for free at a few places! (On smackjeeves, tapas, or webtoons!) <333 sorry for the shill I just like to make sure people know all the projects I got going on hehe

Oh I know the prolouge! You can see my username on last episodes of both Tapastic and Webtoon! I am excited on learning about how the two met. I think it's the most important part to the story and the biggest missing puzzle piece.

Oh! Well thank you so much, I hadn't even noticed, oops!

How they met is def something people have been asking for a while and I'm glad I can finally give everyone an answer! The prologue has been really fun to work on so far <3

After playing the other games you have made and the comics, I look forward to this game.  I love your art style and the stories, and I love games with Yaoi and find there isn't a lot out there especially good ones.  I enjoyed Tomai a lot.  I follow your tumblr and check it often, I wish I could support you on Patreon so I can see other stuff but I just can't afford it.  But I can't wait to see what comes of this game the map system with many places to explore sounds intriguing, as well as the point and click system.  Not many visual novels contain those features and it makes the game sound so much more involved and helps with the connection to the characters and their stories.  I look forward to this game and if you ever need a beta tester or reader I'm available 24/7, I'm not working right now and I'm currently beta testing Tailor Tales so I have some experience with it.  Anyway good luck with the game.

Aw hey-- thank you so so much!

I'm really glad to hear you like my comics AND my games (not everyone likes both) -- and my tumblr too! ;v; I'm always super honored and excited when I hear people are looking at everything I've made all together-- cuz it's been a lot of fun making stories in different mediums!

I'm really looking forward to when I have time to work on this game! Right now I'm super busy with commission work and my regular comic and some of my games have fallen to the wayside-- but I already have a TON of ideas for this game and for me it's just about finding time to when I can dedicate to this game. ^^ I promise to make the wait worth it, hehe!

I also have one more game I need to finish before I think about picking up this game and I hope you and everyone else will enjoy it-- it's a bit different from what I've done before and that's what's exciting about it!

Anyways-- I'm rambling! I would love any beta-testing you may want to do and I'll try to make an announcement about it here or on Tumblr when I need that kind of thing so just keep your eyes peeled and we can get in touch!

Thank you again for checking out all my stuff and for your lovely comment-- it means a lot to me! <3