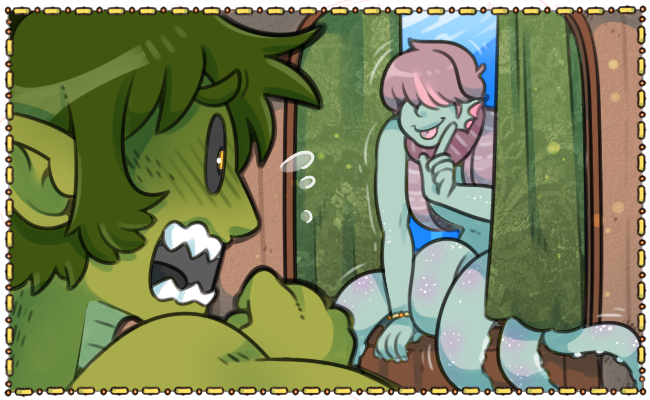 This should (hopefully) be my last update before the OFFICIAL update for the Tomai DLC but I wanted to get everyone up to date with what's going on. So, let's talk about some stuff:

As some of you may have heard, Arcade Party (the writer for Tomai, Yarrow Valley, and AWOO-- all projects I've been a part of) has quit game dev for good and so that leaves me in an interesting place! Tomai and AWOO are now projects that I will be working on *solo*.

I've had almost all of the assets for the Tomai DLC done for months now, but had been waiting on the writing side of things to see them get to fruition. But, as I recently discovered; there's actually nothing written up by Arcade Party for said DLC and thusly; the writing will now fall into my lap!

Which isn't as big of a deal as it seems, actually! The Tomai cast was originally made by me (with The Lady and good 'ol Dad being characters introduced by Arcade Party-- and whom I both love) and I've always had a lot of my flavor and suggestions within our collab projects from the start-- so I don't think I'll be lacking in terms of content or spirit, if that makes sense?

I will admit that my writing chops aren't quite as strong or as clever as Arcade Party-- but I'm always trying and improving and doing my best! (And getting editing and feedback too, of course.) But I'm very good at finishing stuff, and am willing to try new things and just have fun with the projects.

It's really heart breaking to lose a person from my life who I had so much fun with; and I've always really admired Arcade Party and thought that he was so smart and clever and just great to work with but-- I can't change what's happen, y'know? 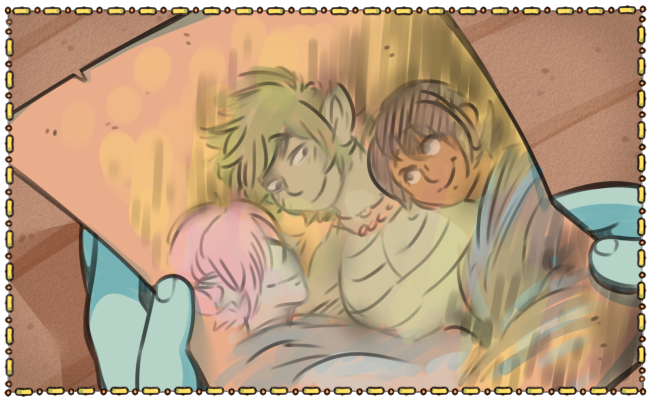 So; forgive me for asking for just a little bit more time, a little bit more patience-- today was my second FULL day of game dev on Tomai (thanks to the lovely support of my Patrons, of course) and I'm very close to finishing up all of the art for the DLC.

After that, I'll need to write the scripts, code some stuff, code in ALL OF THE BUSTS (that's always the most tedious part) and I'm also going to be putting some polishing touches on the main game too. For the most part, I won't be touching much of the existing story that Arcade Party has made and will be following outlines left by him for the DLC-- but it's not out of the question that I may change some stuff within the main story we have received feedback on.

I had planned to finish and release this DLC next month; but after finding out I'll be working basically from scratch-- it might take an extra month or two! We'll see. :)

And yup. That's about it I think. Tomai is being worked on actively and I'm gonna fucking get ya'll this DLC! The game will finally be TOTALLY AND OFFICIALLY COMPLETE!

In the meantime; if you wanna read my weekly updates about the game and see the game evolve in real time or if you want to get the game early upon release-- consider becoming a Patreon supporter of mine and getting that good good exclusive content.

With just 15 days of summer left, will Tomai pursue romance or responsibility?

Yeah, I've read Arcade Party's post about that. It's sad, but things happen - that's life for you. I'm happy you'll be going on with the projects though! I was kinda hoping it'll be you!

You've updated us on Tomai, but I was wondering if you have some infos to share or any form of approximate idea about when you'll be able  to release AWOO? If that's too early, I totally understand. But well, it's one of my most awaited games, so I had to ask.

Anyway, have a good day!

It's so nice to hear from you-- and thanks for  your encouraging words! Comics and games are my full-time job so there's def no way I'd give up on Tomai or AWOO-- but Tomai is my focus right now since it's the story that was initially my characters to start and also, it's simply farther along in development.

In terms of AWOO; right now all I can say is that my plan is to try and get Davis' route out in 2019. I don't think there's any way I can release the game in full, all at once-- because I need money to live and eat and such and time for my other peojects-- and because the game needs TONS of art assets AND ALSO I don't actually know the script yet; it'll just take me a lot longer to dive into.

I actually have a helpful little image of the games I'll be working on in 2019: 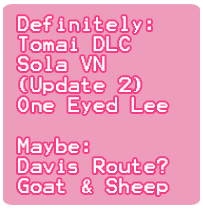 Since a lot of this stuff was dropped into my lap without any kind of script (which was not what I had planned aah) some stuff is just going to take a lot longer than I thought it would so I'm prioritizing stuff that already has a lot of stuff written.

So, for example, Tomai, the second update for the Solanaceae VN and a point-and-click game I haven't spoken about a bunch publicly but a BUNCH of the script is done for that one.

AWOO is a pretty hefty project so I will just need...time. The only thing I can think I can get done in 2019 is Davis' route and that's it! The routes will just have to come out as I'm able to finish them, ya dig?

Anyways; I hope that helps clear stuff up for you and thanks again for sticking around! You're one of my favorite people to hear from. <3

Don't worry, I can totally wait, I just wanted to have some kind of idea. Must be complicated without getting a script, my god! And releasing the game route by route is not a bad idea. Besides, if you do that, I'll definitely play all of the routes haha - sometimes if I like a route too much, I can't do any other after playing it, but that tends not to happen if I get to play the routes one by one like that, unless I really dislike a character.

I totally feel you about the route thing, haha. For me, it comes from a necessity to get funding as the game is being created. I have a Patreon that's doing fine but not fine enough to get me thru a massive game like AWOO. Also, I just like having more frequent, but smaller, updates. (Since I'm used to releasing webcomics!)